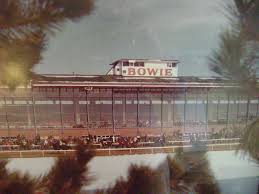 Since that time, the Bowie Race Track property, which lies on both sides of Race Track Road, has been mostly dormant. A few years ago, the City expressed an interest in using Program Open Space funds to purchase some of the property. The owners were not interested in selling at the time.

The property is owned by the Stronach Group and consists of several parcels totaling approximately 160 acres. The company’s Maryland racing properties are known by the name Maryland Jockey Club.

In 2019, the owners proposed closing Pimlico in Baltimore and moving their primary racing operations to Laurel Park. Part of their plan was to upgrade the Bowie site and reopen it as a training facility to support the Laurel track.

On March 18, 2019, representatives of the Stronach Group spoke to the Bowie City Council about their plans to invest $40 million to make the Bowie Training Center (formerly the Bowie Race Track) a state-of-the-art training facility. This early proposal appears to be no longer under consideration due to opposition from the City of Baltimore and many members of the General Assembly.

A new proposal from Stronach seeks to address Baltimore’s concerns, preserve Maryland’s long history of horse racing, and upgrade the infrastructure to today’s racing standards. It does not include any long-term plans to use the Bowie site for training, although the training facility may be reopened for training while improvements are made at Laurel and Pimlico. Instead, Stronach has expressed a willingness to divest itself of at least some portion of the former Bowie Race Track property.

The General Assembly will decide the future of the Maryland racing sites during the 2020 session. Bowie State University and the City of Bowie both have an interest in obtaining the property. The Maryland-National Capital Park and Planning Commission is also interested in acquiring a portion of the property along the Patuxent River.

The Senate version of the bill contains language that specifies that the City of Bowie would receive a majority of the property when the current owners divest themselves of it.

Read the text of the Racing and Community Development Act of 2020 (SB 987) as introduced.

The House version of the Racing and Community Development Act of the legislation (HB 1056) would create a task force to decide the future ownership of the Bowie Race Track property.

Read the text of the Racing and Community Development Act of 2020 (HB 1056) as introduced.

Those interested in testifying or presenting testimony for the hearings should contact Senator Peter’s office or Delegate Valentino Smith’s office for more information (contact information is below).

What should become of the Bowie Race Track property?

What happens to the Bowie Race Track is part of the larger discussion about the future of horse racing in Maryland and while the decision will be made at the State level, the City Council wanted to give Bowie residents an opportunity to have their say about the matter.

Community members were invited to attend a meeting on January 4, 2020 to offer comments on the future of the race track site. City Councilmembers and State Senator Douglas Peters, and Delegates Valentino Smith, Holmes, and Watson were present at the meeting along with approximately 250 concerned residents.

Residents suggested a variety of options for the site, including open space, recreational facilities, community garden space, living classroom experience for local schools, a racing history site, with ownership by the City of Bowie, Bowie State University, or the Maryland-National Capital Park and Planning Commission, or some combination of these options. (See link to the video below.) Many also stressed the importance of preserving the environmentally sensitive areas bordering the Patuxent River. Most residents who spoke expressed opposition to additional housing or to any use that would substantially increase traffic on Race Track Road.

At its regular meeting on Monday, January 6, 2020, the City Council approved a letter to the 23rd Delegation expressing the City’s interest in acquiring the property for recreational uses and to preserve open space. View the letter at the link below.

As this matter is debated in the 2020 session of the General Assembly, residents are encouraged to continue to share their thoughts about the future of the former Bowie Race Track site with the City Council and all of the elected officials who represent them: